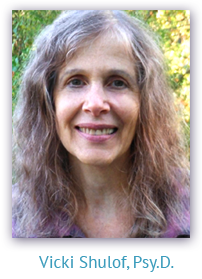 I have been working as a psychotherapist for over thirty years and am still as passionate about my work with people as when I first started out. Every person who comes to therapy is unique and I love the deep sharing and valuable insights that emerge during the course of our work together. My clients have been a continual source of discovery and powerful lessons which have shaped who I am as a therapist.

After completing my undergraduate work (which included a year abroad in Strasbourg, France), I moved to Montreal, Quebec, where I embarked upon my graduate studies – all of which took place in French. French is a beautiful language to express the nuances of emotion!

Working in a variety of inpatient psychiatric hospitals, both as an intern and later as a therapist, I gained valuable insights into a wide variety of psychological issues. While living in Quebec I was one of the founding members of a residential therapeutic community for treating schizophrenic adults (the National Film Board of Canada made a documentary film of our work there).

Later on my work with heroin addicts helped me deepen my understanding of addictions. Subsequent experiences included working as a therapist at the Child and Family Outpatient Clinic in Knoxville, TN and at the DeSisto School for troubled adolescents in West Stockbridge, MA.

For the past two decades I have been in private practice in the Berkshires, where for many years I also ran groups known as WOMEN, FOOD and ADDICTION.

As a therapist I am well versed in almost all of the major schools of psychology including Humanistic-Existential, Object Relations and Cognitive Behavioral Therapy. The following trainings and experiences have been influential in my development as a therapist:

The following quotes have been an inspiration to me:

“Never give up, for that is just the place and time that the tide will turn.” – Harriett Beecher Stowe

“Accept the present moment and find the perfection that is deeper than any form and untouched by time.” -Eckhart Tolle